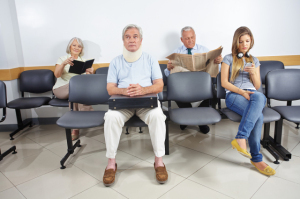 A year after the Affordable Care Act was put into effect physicians have not seen a stark rise in new or sick patients, according to a new athenahealth, Inc. report, funded by the Robert Wood Johnson Foundation. Athenahealth claims that this is the first-of-its-kind report to investigate the effect health care reform had on physicians after one year.

“Contrary to what many anticipated, physician waiting rooms aren’t being flooded by sicker-than-average newly insured patients,” Kathy Hempstead, who directs coverage issues at the Robert Wood Johnson Foundation, said in a statement. “So far, the increase in demand is moderate, and new patients do not appear to differ much from established patients in terms of their chronic conditions and use of health services.”

The researchers used near real-time data from athenahealth’s cloud-based network that includes over 62,000 health care providers and 62 million patients. The report investigated the impact that health care reform had on patient volume, insurance coverage and payor mix.

It found that primary care providers experienced a slight increase in new patient visits however it wasn’t significantly higher than the rate in 2013. In fact, health care reform has lessened the proportion of uninsured patients receiving care in physician offices particularly in Medicaid expansion states.

“Amongst other findings, and counter to what many predicted, we haven’t seen a swell of new and sicker patients materialize in primary care or across specialty settings,” Josh Gray, vice president, athenaResearch, said in a statement. “There’s no evidence that providers are overwhelmed by an uptick of patients with more complex cases or chronic diseases.”

The report found that uninsured visits have also decreased in non-expansion states, even though it’s not as significant as the decline in the expansion states. The report claims that heightened publicity might have influenced qualified patients under the existing laws to apply.

Health care reform had a dramatic effect on payor mix trends, which have historically been very stable. Even though Medicaid enrollment increased in non-expansion states, Medicaid visits have actually decreased as a proportion of all visits and that may be due to physicians prioritizing patients with commercial coverage.

The report also noted that there is a tiny but growing amount of commercially insured patients who are changing to Medicaid in expansion states. That could be because Medicaid’s lower out-of-pocket costs are a better option for low income workers who struggle to afford commercial insurance.