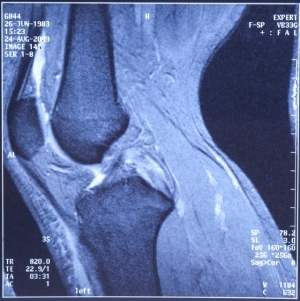 Knee MRI exams are more likely to come back negative if they were referred by physicians with a financial stake in the imaging equipment, according to a new study published in the journal Radiology. This is the latest study to call attention to the impact physician self-referrals have on imaging costs.

Researchers looked at 700 MRI exams, 350 each from self-referring and non self-referring physicians. There was no significant difference in the number of lesions per positive scan, showing that neither patient group was sicker than the other. But 33 percent of knee MRIs from the group with financial interest came back negative compared with 25 percent of scans from the other group.

Though several studies have been done on the financial impact of self-referral, this is the first to look at self-referral from the standpoint of the imaging diagnosis.

"There was a significant difference between the diagnosis and the referrals, so we wanted to make sure the studies weren't in a different clinical threshold or anything like that," study leader Dr. Matthew Lungren told DOTmed News. "Numbers of lesions were the same, and we found that the outpatient clinics were in very similar geographic locations. The physicians' training was also very similar."

In 2010, self-referring providers made approximately 400,000 more referrals for advanced imaging services than they would have if they were not self-referring, according to estimates from the U.S. Government Accountability Office. The scans cost Medicare an estimated $109 million.

One of the challenges in monitoring self-referrals is that it can sometimes be difficult to trace whom scanners belong to. Medicare doesn't have that information, and sometimes payers don't know, either, Lungren said. He said there are various leasing agreements in which money might eventually go to the referring physician, but those can be unclear.

"That's a problem that's going to be addressed to some extent in the Affordable Care Act," said Lungren. "It's something important to note, untangling the web of who owns what and who's referring to whom, and how financially that impacts one another."

Self-referring physicians argue that having control over their own imaging can be beneficial to patients because they can have an important scan done right away. But Lungren said published studies have refuted that claim.

"It's not a cut and dried issue," he said. "We're really looking for someone who can say, Can you come up with a metric that tells me as a payer, or the government, the likelihood of whether this study is going to be useful or not?"

While creating such a metric will require much more data, Lungren said, his research group is currently working on a meta-analysis of the data they have collected.