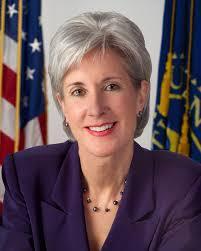 HHS Secretary Kathleen Sebelius
has been overseeing the new exchanges.
Obamacare's troubled rollout has not doomed the program, but it has definitely slowed things down, analysts from Avalere Health concluded. So far, 12 state-based exchanges have enrolled about 3 percent of their expected 2014 exchange participants.

The analysts compared enrollment in the state exchanges to enrollment for Medicare Part D, which went into effect in 2006. Two-thirds of eventual enrollees signed up after the program already began on January 1. And one month before that program rolled out, only 10 percent of voluntary enrollees had signed up. The analogous deadline for the exchanges is Nov. 15.

Though the programs are comparable, the exchanges are still lagging behind thanks to technical difficulties, the analysts said.

"Enrollment in new programs begins slowly and often takes several months to build momentum," said Dan Mendelson, CEO of Avalere Health. "While initial enrollment has been lagging, with aggressive marketing there is still time for awareness of the program to grow and participation to begin."

Vermont and Rhode Island saw the highest percentages of expected enrollees, at 12 and 11 percent, respectively. New York had the highest number of enrollees — 13,000 — but has met only 2 percent of its projected number. Washington D.C. had the lowest enrollment, with only 300 of an expected 25,000 signing up.

Altogether, the 12 states have enrolled 49,100 people in exchanges. Avalere projects that the state exchanges will have signed up 1.4 million people by the end of 2014. The federal government will be releasing its initial enrollment data this week. Numbers are expected to be very low.