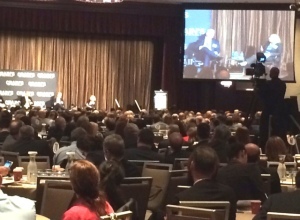 Crain's Health Care Summit
Over 800 health care professionals gathered at the Sheraton hotel in Times Square on Wednesday morning to attend the Crain's New York Business Health Summit. The event set out to break down the finer points of the $8 billion in waiver payments being issued to New York State's Medicaid program over the next five years courtesy of the federal government.

Although the Delivery System Reform Incentive Payment (DSRIP) takes federal savings generated by the Medicaid Redesign Team (MRT) and gives it to New York State to tighten up their reimbursement programs for Medicaid recipients, it could also mean fundamental improvements to the state's health care infrastructure at large. As one may expect: optimists see an opportunity to usher in a new era of health care, while pessimists are worried about throwing money down the drain.

Over the course of four hours, Crain's passed the mic among insiders with dynamic perspectives on the payout. One of the most interesting portions of the event involved five experts sharing their views on the room for improvement, the potential for progress, and the necessary evil of jobs being lost along the way.

All boats must rise

The first of these speakers was Jason A. Helgerson, Medicaid director for the New York State department of health. He described the core objective of the DSRIP as, "breaking down the silos once and for all between the various sectors of health care." Helgerson emphasized that although it starts with Medicaid, the structural innovations made- and education acquired- will inform all aspects of N.Y. health reform.

The money will be divided among performing provider systems (PPS), which will essentially be networks of traditionally competitive health centers uniting to reduce redundancies among themselves.

Helgerson sites three main factors in determining how funds will be allocated. First, each PPS can select up to 10 of 44 different projects. The more transformative projects will garner greater reimbursement, said Helgerson. Second, because this is really all about Medicaid, the money will go to the PPSs that are serving the highest volume of Medicaid patients. Third, it will depend on the quality of a server's application. "There is a lot riding on your application score," said Helgerson, "it is set in this planning year but stays with you for the five years of the waivers."

"This is about lasting change," said Helgerson, "This is not about bringing a bunch of providers together, doing a bunch of good work for five years, and then letting everyone go back to the old way of doing business." Instead of focusing on the $8 billion, Helgerson said the real issue is addressing the $57 billion N.Y. already spends on Medicaid annually.
1(current)
2
3
4