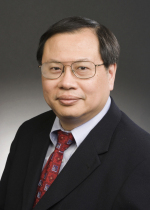 The award, named in honor Paul C. Aebersold, a pioneer in the biologic and medical application of radioactive materials and the first director of the Atomic Energy Commission’s Division of Isotope Development. The honorees are selected by the SNMMI Awards Committee, to recognize outstanding achievement in basic science applied to nuclear medicine and was first presented in 1973.

Wong has more than 30 years of experience with brain PET imaging and many firsts. As part of his PhD thesis, he provided the preclinical work and medical oversight and data analysis of the first dopamine D2 PET receptor imaging in human beings, and as PI of the team carrying out the first aging study of D2 receptors, the first study suggesting elevations of D2 dopamine receptors in schizophrenia, one of the first human PET radioligands routinely used for the dopamine transporter, and one of two studies to first document cocaine craving measured by intrasynaptic dopamine release.

He and his lab at JHU collaborated with Avid Radiopharmaceuticals on the first FDA F-18 amyloid radiopharmaceutical (AV-45) imaging in human beings. He and collaborators have recently developed new human PET and single photon emission computed tomography radiotracers.

Wong received his medical degree from the University of Toronto Faculty of Medicine in 1977, his nuclear medicine residency at JHU and American Board of Nuclear Medicine certification in 1982, and his doctorate in radiation health sciences from JHU in 1990. He holds academic appointments at the University of Copenhagen in Denmark and continues to serve in various roles with the National Institutes of Health including the Center for Scientific Review Neural Basis of Psychopathology, Addictions and Sleep Disorders Study Section.
1
2
3
4
5
6
7
8
9
10
11
12
13(current)
14