Neiman was born in Detroit, Mich. He received his bachelor’s and medical degrees from Wayne State University in Detroit and completed his radiology residency and a fellowship in angiography at the University of Michigan in Ann Arbor. He is accomplished as an educator and administrator — he began his career in Washington, D.C. as an instructor at the Armed Forces Institute of Pathology and chief of cardiovascular radiology at Walter Reed Army Medical Center. He spent the next 10 years as a professor at Northwestern University in Chicago, Ill., as director of angiography and sectional imaging. He also was director of angiography at Children’s Memorial Hospital in Chicago. Neiman was a clinical professor of radiology at the University of Pittsburgh from and a professor of radiology at Temple University in Philadelphia.

Neiman chaired the ACR commissions on ultrasound and economics, and he served as a member of the Board of Chancellors and as chairman of the board. During his tenure as ACR CEO, he helped establish the ACR Education Center, Radiology Leadership Institute, Harvey Neiman Health Policy Institute and the American Institute for Radiologic Pathology.

Neiman has published more than 125 scientific papers, 26 book chapters and is the author of the book, Angiography of Vascular Disease. He has given nearly 300 invited lectures and scientific presentations. 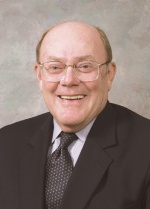 J. Frank Wilson, M.D.
Born in Huntsville, Mo., J. Frank Wilson, M.D., earned his undergraduate and medical degrees from the University of Missouri before completing his residency in radiation oncology at Penrose Cancer Hospital in Colorado Springs. He served fellowships in the Radiation Oncology Branch of the National Institutes of Health and at Hospital Creteil, University of Paris. Dr. Wilson joined the Medical College of Wisconsin as an assistant professor of radiology, rising to the position of professor of radiation oncology and department chair. Wilson also served as director of the MCW Cancer Center. Today, Dr. Wilson serves as the chair and Bernard & Miriam Peck Family Professor of Radiation Oncology and director emeritus of the MCW Cancer Center.
1
2
3
4
5
6
7
8
9
10(current)
11
12
13
14